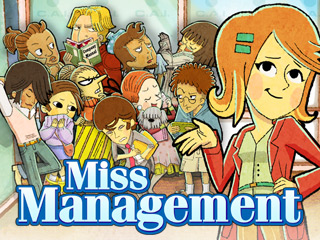 Miss Management is a Time Management Game, which unlike most has a plot, considering that it's the result of Diner Dash mating with The Office. You play Denise, a young woman starting her first day as both the office manager and the Only Sane Employee for Conkling Associates International. Denise must ensure that her infuriating coworkers complete both their tasks and reach their desired goals—which typically consist of lounging around and not doing work. Combined with the fact that all of her coworkers possess the occasional quirk, conflicting personalities and wildly different work ethics this proves to be a tough job for Denise.