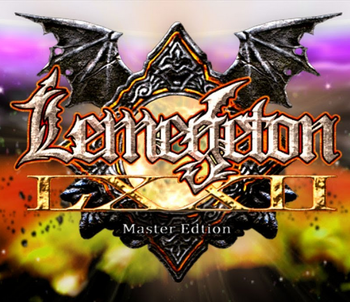 Lemegeton is a Metroidvania game by Lantansia for both iOS and Android. It's being published in segments; thus far, only the two episodes are available, but there will be four in total.
Advertisement:

The action starts with Sabio, a member of Saint Guardian, pursuing the renegade Pecador into the Italian ruins of Craco to recover him and the artifact he stole—Solomon's Ring. Almost as soon as he steps in, Sabio gets trapped by a rising barricade...then finds the ring itself, although with Pecador nowhere in sight. The situation quickly gets a lot more perilous for Sabio. This is because every so often, Craco plays host to the 72 demons that Solomon once imprisoned and enslaved and the "Feast of Chaos" they hold to honor Bael and renew their oaths of fealty to him, and the greater part of them are hostile to all humans. Sabio included. After meeting the trapped theurgist Noiva, Sabio decides that, since he's recovered the stolen Ring, he should probably focus on finding an escape route for the two of them. Not that the demons are going to be cooperative...especially not when he comes back to recover Dawn and Pecador.