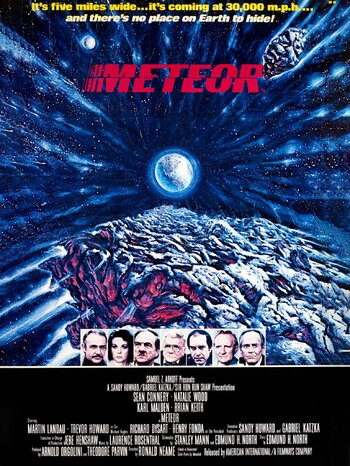 Meteor is a 1979 impact event film directed by Ronald Neame, one of the last attempts to maintain that decade's Disaster Movie genre (although given the basic premise of two of the blockbusters of more modern times, maybe it was prophetic).

An All-Star Cast — including Sean Connery, Natalie Wood, Karl Malden, Brian Keith, Martin Landau, Trevor Howard, Richard Dysart, and Henry Fonda — work to stop a five-mile wide meteor (yes, a five-mile wide space rock is called a meteor, not an asteroid) from hitting the Earth in six days after it's detected within the asteroid belt.

And, somewhere... an astronomer is crying.