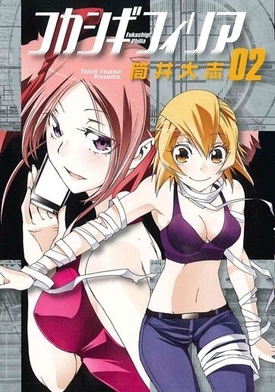 "In the name of 'justice', let's crush them!"
— Kanae Tasuku

Four incredible high schoolers, Himeji Misaki (Miisha), Yuugo, Rikiya and Tasuku are determined to clean up the city of criminals through any means possible, whether it be violent or illegal.

While hunting down human traffickers, The Protagonist Tasuku happens upon a pretty girl in handcuffs. Oddly enough, wrapped only in a blanket, with handcuffs around her wrists, this girl is a mute amnesiac and writes down everything she wants to say. On her left hand is an insignia of the man whom Tasuku is looking for, a man named Isumi who took care of him after his parents' deaths and disappeared three years before the storyline.

He also discovers that this girl, who calls herself Noa, is also able to predict the future. She predicts that he will kill the new transfer student Asuma, and a strange man named Shidow appears ...