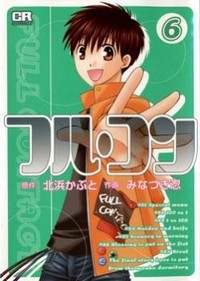 "It'd be nice if I could be strong, too..."
— Ryuuichi Otowa, accidentally kicking off the entire plot

Full Contact (also known in some circles as Furu-Kon or FL-CN) is a 6-volume Slice of Life Martial Arts/Sports Shōnen Manga written by Kabuto Kitahama with art by Shinobu Minazuki. It was serialized in Comic Rush from 2004 to 2007.

The story begins when the protagonist, Ryuuichi Otawa is rejected by the girl he likes because he's weak, and she only likes strong people. That night, while watching a martial arts tournament on TV, Ryuuichi absently wonders if he, too, could become strong. His mother overhears him and promptly introduces him to Iwao Kiryuu, president of a karate dojo and boarding house, and enrolls him in it without his assent.

What follows is a light-hearted Slice of Life journey of self-discovery, comedy, young love, and many, many of levels in badass.