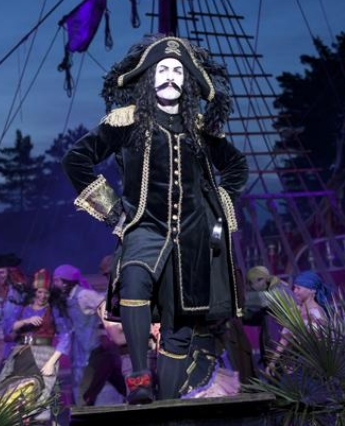 "I knew it had to be me — the great Captain Sabertooth — who got to be in this picture."
Advertisement:

Captain Sabertooth ("Kaptein Sabeltann" in the original Norwegian) is the star of a number of Norwegian theatrical plays by writer/actor Terje Formoe. The plays have been running every summer since 1990, and are shown at night on the outdoors stage at Kristiansand Zoo and Amusement Park, and for the first ten years Formoe himself played the titular character before he decided to focus on his job backstage instead. (He did play the role again for a single season in 2010, and still occasionally portrays the Captain in guest appearances.)

Captain Sabertooth, the self-declared King of the Seven Seas, is the captain of the pirate ship The Dark Lady, and with his crew terrorizes the seven seas in the hunt for gold and riches, but his main goal is to find the treasure of Gory Gabriel, the former pirate king. The second protagonist of the plays is Pinky, a young boy who was brought up by the pirates and works as their galley boy, and who has two goals: To show Captain Sabertooth that he can be a real pirate, and to find out what happened to his father, who vanished.

There are all in all eight separate plays, though two of them are reworkings and combinations of earlier plays:

In addition, all the plays have been reworked and rewritten for every season they were performed — new songs and new characters were added, other songs and characters were removed, lines and plot threads and details were changed. The Hunt for the Magic Diamond in particular went through such heavy changes that it's pretty much three separate plays with similar stories but wildly different details.

There was also a musical show in 2015 called Captain Sabertooth's Pirate Party, which was played on Chat Noir. It featured most of the regular characters, the majority of popular songs from the franchise, and a somewhat loose plot that connected the song numbers, mostly involving the Count of Gral (the villain from The Enchanted Island) trying to steal the Magic Diamond (from The Hunt from the Magic Diamond) and a young pirate girl who hopes to sail with Captain Sabertooth getting caught up in the events.

For more about the various characters and franchise-wide tropes, see the franchise page.