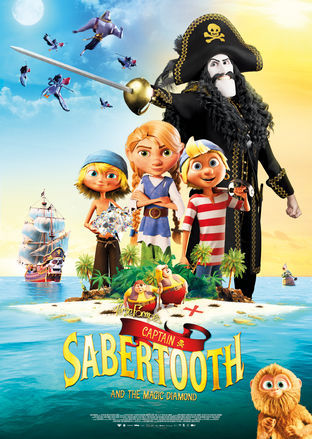 Captain Sabertooth is the self-declared "King of the Sea," a ruthless pirate captain who's always hunting for gold and riches, with his ship, The Dark Lady, and with the help of a... less than impressive crew. First mate Longfinger is competent and intelligent, but the rest of the crew includes the lazy slacker Benjamin and the bumbling twins Wally and Wimp — and let's not even mention Tully, the most incompetent ship's cook on the seven seas.

The stories of the pirates' escapades were first seen in a series of outdoors stage plays at Kristiansand Zoo and Amusement Park, but over the years he's branched out to star in books, comics, TV shows and movies.

In 2003, the first full-length animated movie in the franchise was released, based on the stage plays but adding several new characters and twists. It was simply titled Captain Sabertooth, though the English dub for some inexplicable reason got the title Captain Sabertooth: The Next Adventure.

The movie tells of the orphaned boy Pinky ("Tiny" in the original English translation), who was found by Captain Sabertooth's crew as a baby and ever since has been in their semi-competent care. All his life he's worked as a galley boy whose main task is to peel potatoes and throw away the garbage, but he dreams of one day impressing Captain Sabertooth and be acknowledged as a proper member of the crew. He gets his chance to prove himself when the pirates set out to find the treasure of Gory Gabriel, the previous pirate king, and their search leads them to the idyllic Luna Bay.

Pinky, being young and inconspicuous and not looking like a pirate at all, is sent to scout ahead and try to find out about where the treasure is... but when he meets Veronica, a girl his own age, and starts to get to know the friendly people of Luna Bay, he starts having second thoughts about this entire "pirate" business.

The problem is that Captain Sabertooth, when out for gold, isn't willing to listen to any kind of soft-hearted sob stories about decent kind people who need their treasure themselves. Another problem is that the new ship's cook, Happy Jack, is planning a mutiny and is even less inclined to give anyone a break.

In 2019, sixteen years after the first movie (and after the live-action movie from 2014 failed to get a sequel), another animated movie was released, this time in CGI. Captain Sabertooth and the Magic Diamond is loosely based on the stage play Captain Sabertooth and the Hunt for the Magic Diamond, and takes place some time after the events of the first movie. Pinky now lives in Luna Bay with Veronica and her aunt Bessie, and is quite happy as a landlubber — though Veronica is starting to get bored with her peaceful life and wishes something exciting would happen.

Out on the sea, Captain Sabertooth and his crew are hunting for a legendary magic diamond, which can grant one wish to whoever is holding it — but only when the light of the full moon shines on it. The magic diamond has just fallen into the possession of the evil vampire Maga Khan, who is just waiting for the full moon so that he can wish to become immune to sunlight and be free to conquer the world. Before that can happen, though, the diamond is stolen by a starving young boy named Marco, who looks a lot like Pinky.

Maga Khan searches, rumors fly, and soon enough Captain Sabertooth hears the rumors that Pinky is the one who has the magic diamond, or at least knows where it is. So of course the pirates return to Luna Bay to get Pinky so he can lead them to the diamond, and don't believe him when he tries to tell them he has no idea what they're talking about. As he's taken prisoner on board the Dark Lady, Veronica dresses up as a boy and joins Captain Sabertooth's crew in the hope of freeing him... and soon they're both swept up in the hunt for the magic diamond.

Tropes shared by the movies:

Tropes exclusive to Captain Sabertooth: The Next Adventure:

Tropes exclusive to Captain Sabertooth and the Magic Diamond: