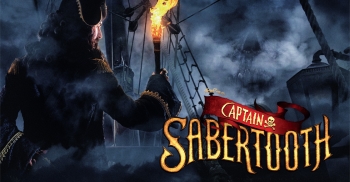 On an island known as "The Invisible Land," where the pirate king Captain Sabertooth rules, lives the eleven-year-old orphan Pinky ("Tiny" in other translations), who is looked after by Sabertooth's first mate Longfinger and, when he's not home, the female weapon-smith Rosa. Pinky's biggest dream is to one day become one of Captain Sabertooth's men and be allowed to sail out on treasure hunts and plunderings with the pirate ship "The Dark Lady," and when his best friend Raveena (nicknamed "Raven") tells him that Captain Sabertooth needs a new deckhand, he sees his golden opportunity.

But Bjorn the Brave, an earlier crewmember of Sabertooth's, has mutinous plans — and when he and his band of outcasts try to steal and sail away with the Dark Lady (with Pinky on board), this is the start of a chain of events that lead to both Pinky, Raven and Rosa being swept along with the Captain and his crew on a long journey in search of treasure in the fabled kingdom of Lama Rama, but also a search for Pinky's long-lost father, who might still be alive after all.

In Lama Rama, the rich, jolly and prank-happy King Rufus rules with laughter and merriment (while his dour and power-hungry brother Prince Badal would more than anything like to use the riches of Lama Rama to conquer and rule other places rather than waste everything on parties, jokes and silly hats), and he is said to keep in his treasure chamber "The King's Pearl," the most valuable treasure in the world. Both Captain Sabertooth and Bjorn the Brave want this treasure, so now the stage is set for intrigues, alliances, betrayals, theft, swordfights and a heavy dose of good old-fashioned pirate adventure.