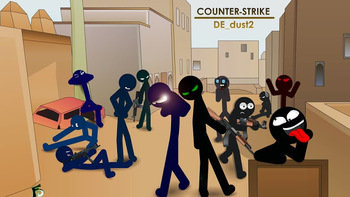 Flashdeck Animations are a series of online animations by the animator Flash Deck based around the Counter-Strike series, mostly Counter-Strike: Source. It ran infrequently from 2003 to 2009, and has accumulated over 163 million views on Youtube. Comedy-based, the series has a roster of characters, each based off a Counter-Strike-player stereotype, fighting each other in a typical game of Counter-Strike.

It was originally going to have a big "movie" and sequel to the series' magnum opus, ''De_dust2'', in 2013 titled ''Hacker's Wrath'', but the Kickstarter failed and the series was supposedly cancelled for good.

It's composed of five primary episodes of the aforementioned regular matches, consisting of:

A few additional shorts were made for it, including: