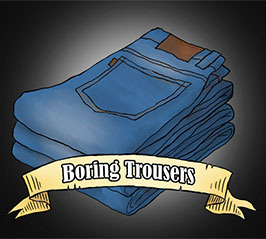 Following in the footsteps of Retsupurae, Boring Trousers

is an online riffing group that makes Let's Play-style YouTube videos. Taking LPs and Fanimes that have Sturgeon's Law in full effect, they mock the heck out of them with humorous group commentary.

—except for episode 3 and onward, which is on their YouTube channel), live streams, and reviews. Their first video was posted in 2010.

Boring Trousers has also riffed works with their own Trope pages: