Web Video / The Adventures of Feelgood and Longbottom 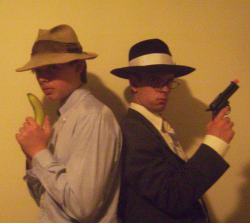 Irving Feelgood on the left, Carl Longbottom on the right, as seen in Hard Rock.
"The Adventures of Feelgood and Longbottom"

is a comedy film series written and directed by some moron named Chris G (Dr Furball), and starring his brothers David and James.

The series follows Irving Feelgood (David) and Carl Longbottom (James) as they journey through Science Fiction, Film Noir and other genres. Originally educational films made for David's science class, it was decided to be as funny as possible. In fact, the crew ended up having too much fun making them, to the point where the third film, Starmageddon is being made without an educational lesson to be learned.

As of this writing, the series consists of: