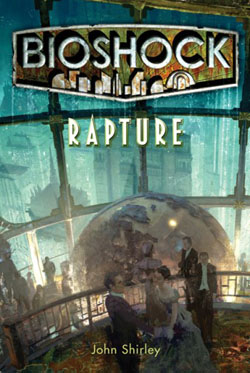 BioShock: Rapture is a tie-in Prequel to the video games BioShock and BioShock 2. It was written by John Shirley and released by Tor Books.

The novel goes into detail about the numerous events mentioned in the games' Apocalyptic Logs. After World War II, billionaire tycoon Andrew Ryan designs the underwater city of Rapture to escape; not just from the looming threat of atomic devastation, but from the control of those he percieves as parasites who unjustly steal the profits of the working man (while, at the same time, denouncing the protests of workers' unions as "leeches" demanding a handout). Seeking to prove his personal values effective, Ryan invites the best and brightest from various fields to live with him in this underwater utopia—chief among them Bill McDonagh, a former low-rent plumber who was elevated to Ryan's chief building engineer when the latter was impressed with his work ethic.

At first, things in Rapture seem to be going exactly as Ryan envisioned—a society free of taxes, with artists and scientists alike able to pursue their research without having to deal with the constraints of government. But several problems soon arise: an increase in population leads to a need for more housing; when a less educated group of people are brought in to build new housing, they soon find themselves unable to find more work and are thus left to fend for themselves. This creates a large underclass, many of whom are desperate to make ends meet—desperate enough, even, to join the underground smuggling ring which imports forbidden items from the surface world. Resources run short when the initial residents do not feel like being totally self-sufficent. A lack of regulation on industrial process causes chemical leaks which slowly compromise Rapture's structural integrity.

As civil unrest grows in the midst of all of these circumstances, the situation is made worse with the discovery and widespread distribution of ADAM, a genetic modifier which grants its users extraordinary powers, but at the price of addiction and mutation.

Eventually Rapture erupts into civil war, and the city falls apart until it reaches the shattered condition in which the player will later discover it. The book follows this decline into anarchy, told from several perspectives along the way: Bill McDonagh, as he watches the utopia he helped build lose its way; Frank Fontaine, cutthroat gangster who seeks to exploit Rapture's secrets for his own criminal gain; Chief Sullivan, the beleagured head of Rapture's security as he tries to keep doing his job in an increasingly-deranged environment; Bridget Tenebaum, the brilliant-yet-troubled scientist who discovered ADAM in the first place and later comes to regret her actions; and Andrew Ryan himself, as he stubbornly clings to his beliefs even as it becomes clear that they are flawed, and causing Rapture to steadily collapse...