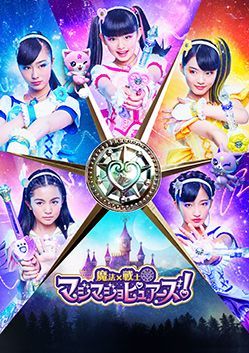 Magic x Warrior Magi Majo Pures! is a Japanese tokusatsu series airing from April 2018 on TV Tokyo. It is the second installment of the Girls x Heroine! franchise created by OLM Incorporated and Takara Tomy with cooperation from Shogakukan and LDH. The series is directed by Takashi Miike.

The Jama World has stolen the Majoka Jewels from the Magic World and plan to use them to corrupt people's dreams to take over the universe. The Majoka Jewels are turned into Akiramestones, which will turn people into Akiramest. In the human world, Momoka Aino joins Rin Shirayuki and Mitsuki Hanamori as a Magic Warrior in their quest to take back the Majoka Jewels, which they do so by purelizing Akiramests with sparkling magic.