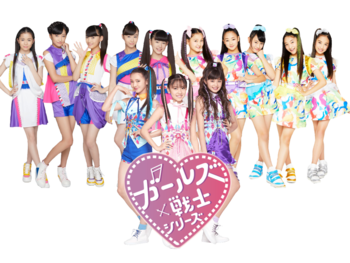 The Girls x Heroine! series is a Japanese tokusatsu series helmed by Takashi Miike and produced by OLM Incorporated and Takara Tomy in collaboration with Shogakukan and LDH. It is a live-action Magical Girl series aimed at girls from ages 2 to 6, with dances choreographed by EXPG Studio from LDH. The shows are very Strictly Formula and involves the characters recovering a set of MacGuffins stolen and corrupted by an evil force.

The series has been running since 2017, with its first installment, Idol x Warrior Miracle Tunes!, becoming an instant hit with its primary demographic all across Asia. The show also attained a Periphery Demographic among parents due to the elaborate choreography and Japanese Pop Music elements.