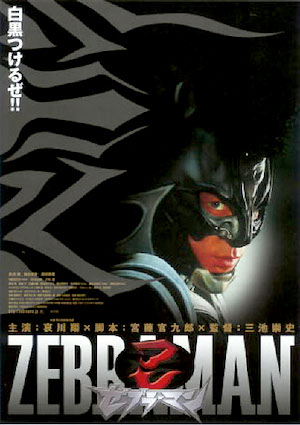 Zebraman is a 2004 film directed by Takashi Miike.

A satire/homage of Japanese tokusatsu television, such as Kamen Rider or Super Sentai, this funny and touching movie follows Shinichi Ichikawa, a Japanese father and school teacher. Unappreciated by his family and colleagues, Ichikawa finds solace in daydreaming about his childhood television hero, Zebraman, and an Odd Friendship with a young fan, Shinpei Asano. When mysterious sightings of monsters and aliens begin to spread panic in his neighborhood, Ichikawa begins developing supernatural talents of his own and defending the frightened citizens.

In the sequel, Zebraman 2: Assault on Zebra City, Ichikawa finds himself 20 Minutes into the Future, when scientist Kozue Aihara has somehow made use of the Zebraman motif to turn Japan into a Crapsack World, and his daughter Yui is the face of the empire. Fortunately Ichikawa still has allies, like the now adult Asano - except thanks to Laser-Guided Amnesia, he doesn't even remember how it began and why it's his business to begin with...

Not to be confused with Zebra Girl.

Zebraman 2: Attack on Zebra City has examples of: