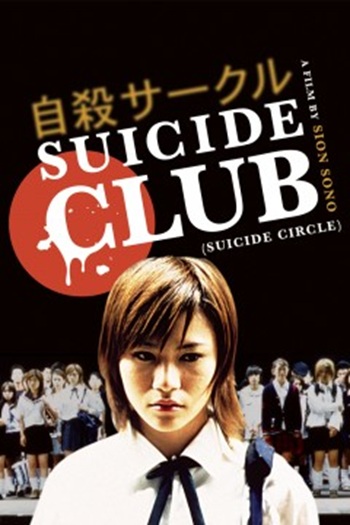 In Tokyo, 54 schoolgirls leap in front of a subway train committing suicide. Shortly after, at a hospital, two nurses kill themselves by jumping out of a window. At both locations rolls of flesh are found, with the missing skin matching removed flesh on corpses. Three detectives are notified by a hacker named Kiyoko of a link between the suicides and a website that ties the mystery to an internet suicide cult around a guy named "Genesis". Within the next days, the suicide epidemic spreads over Japan and many more deaths occur. Will the police be able stop this mysterious epidemic?

Directed by Sion Sono. A prequel/sequel, Noriko's Dinner Table, was released in 2005. A manga by Usamaru Furuya was also released at the same time of the movie's Japanese DVD release.