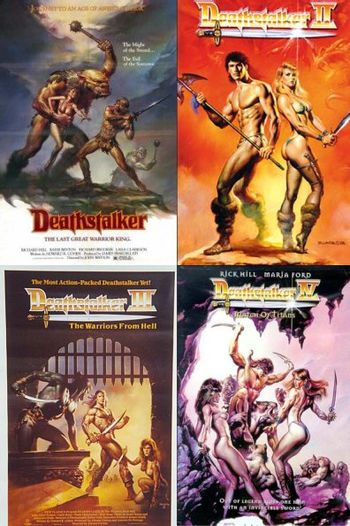 Financed by famed low-budgie director/producer Roger Corman in response to the popularity of the live-action Conan the Barbarian movie, The Deathstalker film series would grow to become the most infamous of the many low-budget Heroic Fantasy films that were made during The '80s. One reason for the series' infamy among aficionados of bad cinema is the constant change in tone and leading men between the films. Indeed, except for Rick Hill, no actor has ever played Deathstalker twice and never in concurrent films.

The first movie is a Low Fantasy tale similar in tone to the works of Robert E. Howard, with lots of semi-naked slavegirls and ultra-violence. In this movie, Deathstalker is a standard Barbarian Hero who seeks three artifacts that will give the bearer ultimate power. His opponent is the local Evil Sorcerer, Munkar, who is holding a tournament: nominally to find a worthy heir but truly to eliminate all the warriors capable of defeating him.

The second is an Affectionate Parody of sword-and-sorcery movies, reportedly improvised almost entirely on the set with what little writing there was being done by director Jim Wynorski and actor John Terlesky, who plays Deathstalker as a Loveable Rogue and Prince Of Thieves. (Not THAT Prince Of Thieves!) The action here centers upon Deathstalker's efforts to help Princess Evie reclaim her throne from the Evil Sorcerer who replaced her with a vampiric Evil Twin.

The third is a standard High Fantasy story, with good and evil wizards fighting over possession of several magic stones which hold the secret to a lost city. In this movie, John Allen Relson Nelson tries to play Deathstalker as a Jerk with a Heart of Gold Mercenary but succeeds only in being a Jerkass. This installment is probably the best known to the public at large as it was featured on Mystery Science Theater 3000 and it has its own page on their index. Ironically, despite being the best known installment, it is the only one that has not been released on DVD, other than the Mystery Science Theater 3000 episode version.

The fourth is a Low Fantasy tale, with a fairly similar plot to the first movie, centering around a combat tournament. Indeed, the only major difference in the stories is that the Evil Sorcerer has been replaced by a Hot Witch. Rick Hill, who played Deathstalker in the first film, returns to play a more classically heroic Barbarian Hero. This movie installment is probably best known for borrowing lots of plot elements and Stock Footage from the first three films.

The Series Consists Of:

Not to be confused with the book series of the same name by Simon R. Green, which can be found here.