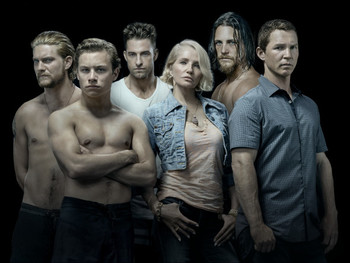 The 2016 Foreign Remake of the critically acclaimed 2010 Australian indie movie, the 2016 TV series Animal Kingdom, set in modern-day suburban Oceanside, California. It details the life of the Cody family, a bunch of criminals plus adrenaline junkies who live on the Pacific Coast, near the US-Mexico border and the strategically located Camp Pendleton of the United States Marine Corps, just north of the city. Following the death of his mother from a heroin overdose, Joshua Cody (J as he's called) moves to be with his grandmother (called Smurf) in the city near the beaches and its famous pier and is introduced to a life of crime by his uncles - plus their love of extreme sports. No one even among their friends would know what's next for him, his grandma, and his uncles.

Unlike the Aussie original it has a mix of old and newcoming stars with veteran movie actress Ellen Barkin in the lead role as Janine "Smurf" Cody, while incorporating elements of Oceanside's best spots and its surf scene. Aired on TNT, it is produced by Jonathan Lisco and John Wells - the same production team behind ER, The West Wing, Southland and Shameless (it was reported that the program would be aired before on Showtime alongside the latter, but it was rejected and TNT later approved it).

Given its high ratings despite mixed press reviews in the weeks before and during its June 14, 2016 premiere, TNT gave the signal for a second season of the series in July of 2016. Also airs in Canada through Bravo.

Fans of the movie upon which the series is based may be advised that the tropes featured here may be different or similar to it. The Characters page has a separate section for this.

The Cody Family of Oceanside

Recurring cast of the US TV adaptation