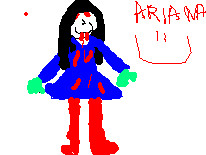 Yes.
Ariana Vampire Queen is a Deviant Art author, admitted admirer of Erin Locklea (of Brewdening Love fame) and the new stage of madness in the domain of Sue-fics.
Advertisement:

There are five main fics centered around Ariana :

Her other fics include:

As well as numerous one-shots that are based on fandoms as varied as all of the above, Shakespeare's plays, The Boy in the Striped Pyjamas and Disney's The Hunchback of Notre Dame.

open/close all folders
General tropes
Vampire queen
Da Life of Delia
Dalton Vampire
True Bloo Heart
Secret Family
Hoggy Edward
Silence of the Lambs 5
Oneshot fics
Ariana has many one-shot fics, especially since a few weeks ago when she became very active. Most are so confused and muddled up that the reader has no idea what the plot is, or whether there is one at all. Her recent fics have been mostly Cross-Overs between Twilight and Glee , though she seems to be getting into The Kite Runner recently.