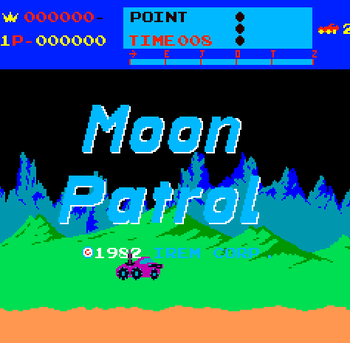 "Your Mission is to patrol Sector Nine and eliminate all hostile threats to you and your Moon Rover"
— Excerpt from the manual of the Game Boy Color port.
Advertisement:

Moon Patrol is an Arcade Game by Irem released in 1982 that was licensed to Williams for distribution in North America. It was also ported to various consoles and home computers by Atari and Midway Games.

In the game you control a moon buggy that must travel between checkpoints on the moon's surface while avoiding crashing into rocks and mines, falling into craters, and being destroyed by UFOs and tanks firing shots at you.

An arcade-exclusive Spiritual Successor, Horizon, was released by Irem in 1985.