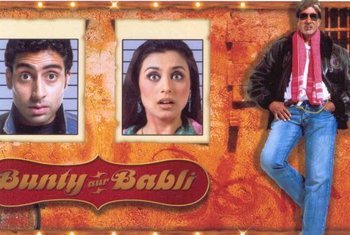 Small time folks from Small Town carry Big Big Dreams. Shattered from the jaded world they live in, they decide to con rich people out of a living, and have lots of fun doing it. And thus a movie is born.

Meet Rakesh Trivedi, a son of a ticket collector from a small town who dreams of making it big. His father gives him an ultimatum to either follow his steps as a ticket collector or leave his house. Naturally, he ventures to the city, only to find his entrepreneurial ideas stolen by the idle rich. Along the way, he meets another small town girl who wants to make it big, Vimmi, who wanted to escape her arranged marriage, and do something with her life. She tries out for the Miss India contest, but after learning that she has to sleep with someone to get a part, she abandons that dream. Both Raj and Vimmi befriend each other, decide to con a whole number of the insulated, and lost rich with crazy zany schemes, like selling the Taj Mahal which some dumb pos keeps falling for. Hilarity ensues.