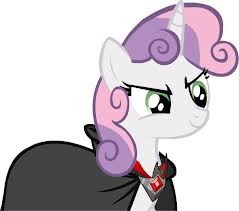 A comedy series of Fanfics written by Akumokagestu on Fimfiction that details Sweetie Belle's adventures as the least threatening villain Equestria has ever known. It centers around Sweetie Belle trying to become the most terrifying villain that's ever lived (probably not really), after trying on the Alicorn Amulet. She tries to achieve her goal of conquering Equestria, only to fail miserably, while most ponies don't even notice her attempts.

Now has an audio reading by Dr Wolf. available here