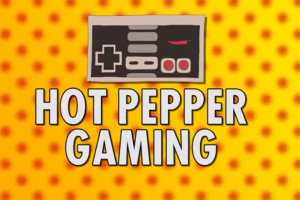 *crunch*
"This was a mistake."
—Jirard Khalil after eating a Congo Trinidad pepper
Advertisement:

The result of Masochist's Meal taken to its logical conclusion, Hot Pepper Gaming

is a YouTube channel started by Vernon Shaw, Erin Schmalfield, and Jared Rosen, in which they review video games after downing, as the name suggests, a hot pepper (their go-to pepper seems to be the habanero, but others are featured occasionally). Or sometimes hot sauce. Or both. Hilarity Ensues. Games and the pepper alike are ranked out of five peppers, and the reviewer caps off the video by downing a glass of milk to begin counteracting the spiciness.

This quickly expanded to feature various Internet personalities like Egoraptor and Markiplier, musicians like Andrew W.K., and even actors like Matthew Mercer and Dante Basco taking up the challenge.

The channel capped off a review of Skyrim Remastered on February 16, 2017 with an announcement that the channel would no longer be producing videos.

For more YouTubing fun with spicy foods, see Hot Ones.

I give this page five out of five hot peppers, and this habanero a million. Gimme the milk!