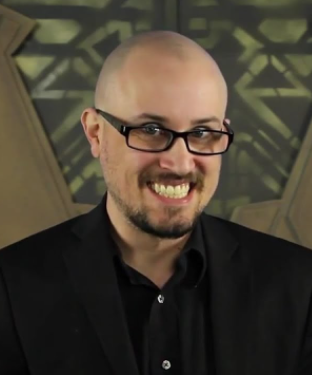 "If I want information, I'll stick with real user edited Internet encyclopedias — like Wikipedia, thank you very much!"

Craig Golightly a.k.a. "Vincent Dawn" a.k.a. "The Cinema Snob" is a lampooning of highbrow art-film lovers who hate any movie which isn't True Art. His backstory was later expanded upon, both within the show and in a movie by Brad Jones (lead actor and writer for The Cinema Snob), revealing that he is a failed exploitation filmmaker who took on a fake identity.* Or not, depending on how the Snob feels about it in any given episode. Empire and the Cinema Snob are also apparently in the same

The Cinema Snob Movie was released in 2012, written by Jones and directed by Ryan Mitchelle. They eventually reteamed to produce Another Cinema Snob Movie, which wrapped production in 2018 and was released on July 26th, 2019. In 2019, the Snob also received a spinoff shortform vlog series, Problematic! with The Cinema Snob, in which the character gives a satirical Political Overcorrectness take on a film-related issue of the day or parodies conventions of other kinds of video reviews.

The Cinema Snob has reviewed the following movies:

The Cinema Snob provides examples of:

"... I'll stick with real woodchipper movies — like Fargo, thank you very much."

Rock: It's Your Decision

The point of Rock: It's Your Decision, was to steer children away from the "evils" of rock music, but instead shows what happens when the youth gets radicalized.

Example of:
The Fundamentalist

Rock: It's Your Decision

The point of Rock: It's Your Decision, was to steer children away from the "evils" of rock music, but instead shows what happens when the youth gets radicalized.