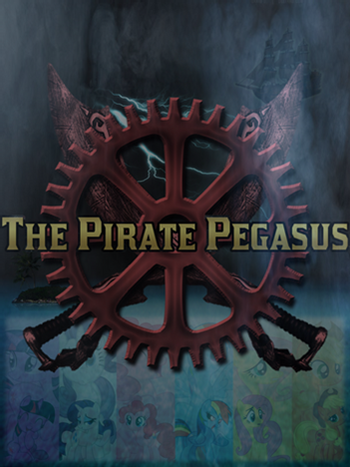 Pirates, sirens, whirlpools, krakens, stowaways, hurricanes, desert storms, mysterious islands, plots of genocide, and an old guy... What's the worst that can happen?
“I am the terror of earth, sea, and air. I am the ultimate pirate captain. I am Korsan…”
— Captain Korsan

The Pirate Pegasus is a My Little Pony adventure fanfic novel written by Mario Hyrulia.

During the Grand Galloping Gala, a bipedal pony named Korsan invades the castle and steals the Diamond Eye, a priceless artifact, and escapes in a floating pirate ship. In response, Twilight and her friends get on their own ship and take off to sea to chase down Korsan. What at first seemed to be a retrieval of the Diamond Eye, turns into a massive villainous plot to eradicate all pegasi and Earth ponies.