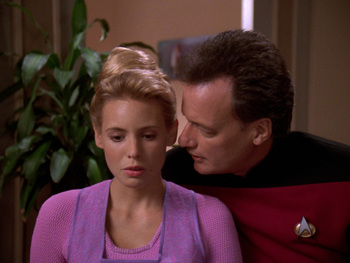 Easy there, Q; you usually only get that close to Picard.
Advertisement:

A young intern named Amanda Rogers boards the Enterprise while they're trying to alleviate the ecological woes of Tagra IV. As Riker leads her to her quarters, she wishes her three puppies were here as she makes puppy-dog eyes at the Commander...and when Riker leaves, three puppies appear!

The next day, we get more of Amanda's backstory: She's an orphan, her parents having been killed in an accident when she was young. Then, when she goes to the cargo bay, she sees a container fall right at Riker's head! But she moves her hand and the thing just barely misses him. Then after Techno Babbling a few solutions for Tagra IV's environmental troubles, the warp core breaches unexpectedly, as foreshadowed in the previous episode. As the core explodes, Amanda comes in to save the day! But how?

An A comes in the form of Q, who tells a stunned command staff that Amanda is a member of the Q Continuum. Her parents weren't human, but actually Q who decided to live like disgusting humans, including the abominably disgusting act of mating. The Continuum was unsure whether this foul act would beget an offspring with Q powers, so they sent Q to oversee her and make sure she doesn't destroy the multiverse with her newfound powers. He wants to take Amanda back to the Continuum for study, but she objects and throws him across the room. Picard suggests that he not do things like walk through a wall and inspect her like a human would inspect a bacteria, then tells Data after he leaves to look into her parent's "accident." Meanwhile, Q's shadow asks him for a progress report. He tells the Q he may have to "terminate the girl," but he may not.

Dr. Crusher convinces Amanda to talk to Q again. Amanda doesn't want anyone on board to treat her any differently from any other member of the crew now that she's a Q. Q takes a more conversational tack, telling her that the Q are indeed omnipotent, and she can do anything she wants, like see her actual parents again or speed up the process of the slow experiment Crusher has her doing. When Crusher complains, Q turns her into a barking dog, but Amanda changes her back.

Once again trying to alleviate her concerns, Q gives Amanda more Q lessons by playing Hide and Seek around the ship using teleportation. Q hides in the warp core and then on the outer hull of the ship. Amanda starts to appreciate the wonders that her powers make her capable of. Meanwhile, Data informs Picard that Amanda's parents were killed by a Suspiciously Specific Tornado, one that shouldn't have even happened thanks to the Federation's all-powerful weather control machine. It suddenly appeared over the Rogers home, demolished just that one building, and then vanished.

Later, Amanda's eating lunch in Ten-Forward when she sees Riker again, and whisks herself and Riker to a romantic gazebo. Unfortunately, this does nothing to woo Riker until she manipulates his mind to love her. But, of course, the artificial love proves unsatisfying, and Amanda puts him back the way he was.

Meantime, Q is summoned to Picard's ready room, where Picard berates him from hiding the truth from Amanda. Q admits that the tornado was the Q's doing. They let Amanda survive because she was deemed an innocent in all this, but now Q must determine if she's fully Q or some sort of human/Q hybrid. If she's not fully Q, she'll be fully dead.

On Tagra IV, Geordi, Riker, and the Tagrans have whipped up some Techno Babble that might work in their situation, and are going down to fix everything, just as Picard tells Amanda that the Q might have to kill her. Q shows up and says the Q are willing to make a deal: She can live as a human, but only if she agrees to never use her powers. She immediately chooses to live as a human, though Q warns her that it won't be as easy as she assumes.

Cue Tagra IV blowing up. Picard immediately accuses Q of rigging this catastrophe as a test, but Q pleads innocence. Needless to say, Amanda uses her newfound powers and saves the day. More than, in fact: she completely restores Tagra IV's ecosystem to peak condition. One crisis averted, another so very, very not. Q says he knew she would do it, and now she has to come with him. Amanda decides to accept her new status as a Q and go with them. And so, with a heart-felt goodbye to Dr. Crusher and her foster parents, Q whisks her away to the Continuum.