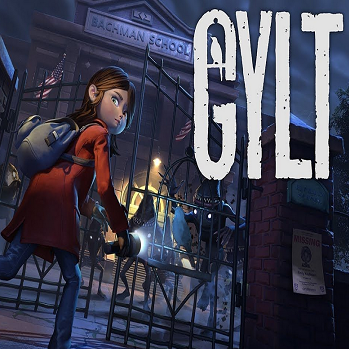 Gylt is a 3D Survival Horror game, developed by Tequila Works (the creators of Deadlight and The Sexy Brutale) and released on November 19th, 2019 as Google Stadia launch exclusive. Following the announcement that Stadia was shutting down, the developers announced a multiplatform release in 2023.
Advertisement:

The player takes on the role of Sally, a schoolgirl who is dealing with the recent disappearance of her cousin Emily, and was putting up "missing" posters of her when she suddenly gets accosted by bullies and takes a route home she is not used to. Upon arriving, however, she notices that her town had suddenly turned into a twisted and dangerous version of itself. Yet, at the same time, she soon learns that Emily had somehow been stuck in this place as well and so now, she must attempt to not only survive but also rescue her from this nightmare.