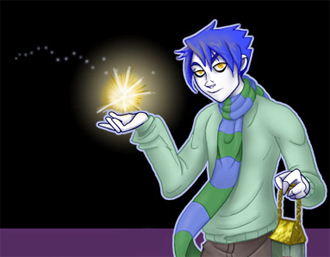 The Boy Who Died
Advertisement:

, by Kat Santoro, is a rather unusual blend of Medieval European Fantasy and Urban Fantasy, with the narrative switching back and forth between two time periods. The comic follows the adventures of a core cast of characters which slowly expands as their places in the medieval portion of the story are revealed.

And many others whose stories are still being revealed.