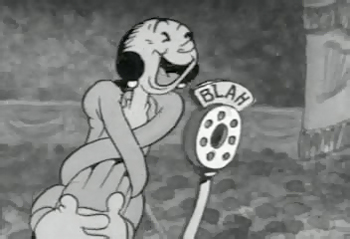 This is when a cartoon character moves without any visible elbows or knees, so their limbs aren't stiff, but rather bendy, like rubber hoses. Just watch pretty much any black-and-white cartoon, to give a broad example. In cartoons made before the mid to late 1930s or so, this was done for practical reasons rather than artistic ones. It all started with Felix the Cat animators Otto Messmer and Bill Nolan, and it was meant to prevent the motion of the limbs in question from looking like they were drawn through a strobe light and flickering — the basic idea was that if you didn't draw joints, you could make absolutely sure that the limbs in one frame overlapped with where the limbs were in the last frame. Higher frame rates, the development of Squash and Stretch, and an awareness of camera blur sharply reduced the need for this kind of animation as time went on, and cartoon characters all of a sudden had joints. These days, this is a deliberate artistic decision on the part of the animator — either to creep you out; to create a fun, zany, or cute character; or as a deliberate nod to The Golden Age of Animation. In the early days, however, it was just how things were done.

In anime, it's often used in conjunction with Super-Deformed, possibly to accentuate the childish nature of the Art Shift. In Western Animation, it was revived with the Thin-Line Animation style of The New '10s.

Related to No Knees, though that's mostly a side effect of a Lazy Artist. Not to be confused with Noodle People, which is about having skinny arms, though the tropes aren't mutually exclusive. A Rubber Man may be a justified version of this.

Ongo gets a little tied up.

Ongo gets a little tied up.