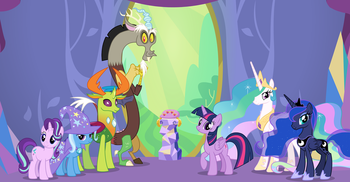 Twilight is busily preparing a special ceremony for Starlight Glimmer, Discord, Trixie, and Thorax in honor of their defeating Queen Chrysalis and saving Equestria. However, a none-too-subtle suggestion from Discord implies that Twilight now has to figure out what to do about Starlight now that she's outgrown the concept of friendship lessons. Twilight, not having thought about Starlight's future, becomes suddenly concerned that she has no idea how to handle Starlight's progress. Not helping matters is Discord telling anypony who will listen that Twilight has a big grand plan for Starlight, driving Twilight into a panic.

Running off on her own, Twilight asks Princess Celestia's opinion on what to do next. While reminiscing, Twilight abruptly realizes that Starlight's graduation means she'll need to go off on her own. Thinking on where to send her, Twilight uses a spell to imagine sending Starlight to the reformed Changeling Kingdom, the Dragon Lands, or the Crystal Empire. In every case, Twilight thinks too hard about what could potentially happen, further compounding her anxiety.

Celestia breaks the mood with a sudden fit of laughter and confesses something: she too dithered over sending her prize student away, afraid of the dangers Twilight might meet but also fearing the loss of her company. In the end, Celestia had to realize that Twilight was ready and send her to Ponyville, with a broad hint that the 'friendship lesson' letters were just a ploy to stay in touch.

Filled with a new confidence, Twilight goes to the ceremony and announces that Starlight has graduated from being her pupil and is ready to make her own way in the world. To her joy, Starlight admits to Twilight that she's not ready to leave either. Twilight also gives Starlight a graduation present: a mirror for her room, filled with pictures of her past victories and friendship lessons, making Starlight feel touched. Twilight promises that even though she may not known what'll come for her, she promises to always be there for her no matter what, as the two embrace each other.