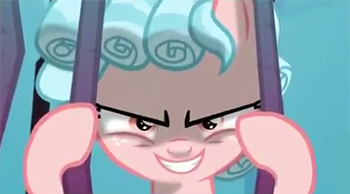 In Tartarus, the Mane 7 learn that Tirek has told Cozy Glow how to use the six Equestrian artifacts to draw all of the magic from the land. They need to escape Tartarus, but without their own magic, they can't open the doors. Twilight decides to try to borrow the magic of all the hybrid creatures being held prisoner, and Fluttershy persuades them to help with the plan. Faced with the prospect of Pinkie Pie entertaining him forever and driving him crazy, Tirek agrees to cooperate as well. Using all the borrowed magic, Twilight forces the doors open so she and her friends can escape, but they find that the last day's sun is setting and fear that they won't be able to get back to the School of Friendship in time to stop Cozy Glow.

Seeing that Chancellor Neighsay is determined to remain in charge of the school, Cozy Glow provokes the other students to turn on him for going against Twilight's friendship lessons. They leave him chained up in Twilight's office, and after they leave, Cozy Glow begins to rant about her vision of using all the friendship in Equestria for power.

Realizing that they can't rescue Starlight without being drawn into the sphere holding her, Sandbar and the Cutie Mark Crusaders break the rest of Sandbar's friends out of the dorm room where Neighsay locked them in. The Crusaders try to distract Cozy Glow long enough for the students to find Neighsay, but Cozy Glow figures out the deception and locks the Crusaders in a broom closet. The students free Neighsay and brief him on Cozy Glow's plans, and he uses the last traces of magic in his EEA medallion to go for help in Canterlot. Descending to the catacombs below the school, Ocellus deduces that the artifacts are draining magic from Equestria by acting as a magnet to pull magic into the orb where Starlight is trapped. They prepare to break the spell by removing the artifacts, but Ocellus warns them that the school might be destroyed in the process.

Before they can try, Cozy Glow returns with a mob of pony students, having convinced them that the non-ponies are the real threat. The ponies rush Sandbar and his friends, and all six end up trapped in the sphere with Starlight. Despite Cozy Glow's assurances, the ponies wonder if this is for the best since it runs counter to their friendship lessons. As she leads the mob away, the Tree of Harmony uses its power to free the six students. The mob refuses to turn on them again, and the students grab the artifacts to break the spell and free Starlight. Magic is restored to all who lost it, including the inmates of Tartarus; Twilight teleports herself and her friends to the school, and Princess Celestia, Princess Luna, and Neighsay rush to Ponyville with a battalion of Royal Guards.

Twilight tells Cozy Glow that while friendship is a powerful force, making friends simply to accumulate power is wrong, and apologizes for failing to teach her that. Cozy Glow declares that she can always make more friends elsewhere and tries to escape, only to be stopped by the students, the Princesses, Neighsay, and the Royal Guards. Neighsay apologizes to Twilight for his past prejudices, having realized at last that all races in Equestria are capable of learning friendship. They find the Young Six rehearsing for graduation, thinking that their studies are finished, but Twilight laughs and tells them that they still have a lot to learn. The Crusaders finally break out of the closet in which Cozy Glow trapped them, but Twilight and Celestia reassure them that everything is fine and that Cozy Glow has been sent someplace where she won't be causing any more trouble.

Meanwhile, Cozy Glow is imprisoned in Tartarus by Luna and the Royal Guards. Cozy greets Tirek, and asks if he wants to be her friend, setting up a potential return for her.

When magic is restored to Equestria, one bit of magic somehow goes to Pinkie.

When magic is restored to Equestria, one bit of magic somehow goes to Pinkie.