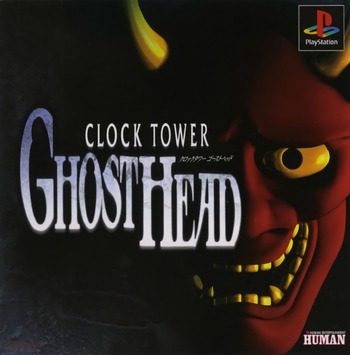 That Hannya mask isn't there for theatrics...
Advertisement:

Clock Tower II: The Struggle Within is a Playstation game released on March 12, 1998 in Japan and on October 1999 in the US and Canada by Human Entertainment (Japan) and Agetec (NA) with the game released again in Japan via the Playstation Network. It's the only CT game known to be made without the involvement of Hifumi Kono, nor with any connections to the other games.

While the Japanese version is set in Osaka, the English release was known to have changed the setting from Osaka to Monterey in California for unknown reasons, though some critics assumed that it was in order to have the game appeal to non-Japanese/Asian gamers, all the characters were given new American names and the script is slightly different in certain areas.

The game revolves around Yu Midoshima / Alyssa Hale, a 17-year old high school student with a Split Personality disorder who's come to Osaka / Monterey in Spring 1999 to see family friend Hajime Takano / Philip Tate as his family. However, when she arives, she finds that someone has Hajime and left him to die, someone who is still in the house and now stalking her as well. Given a strange statue by Hajime, Yu is tasked with burning it to put an end to what he calls the "Saidou / Maxwell curse."

However, even after Yu manages to accomplish this... her nightmare has only begun, as Yu is soon drawn into conflict with other killers as she attempts to get to the bottom of the "Saidou curse", and how it is linked to her own Dark and Troubled Past.