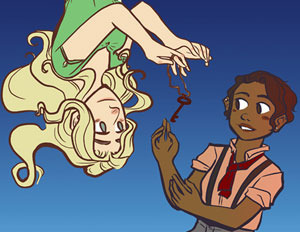 is a Webcomic by Elle Skinner about an inter-universal romance.

Apprentice mechanic Foyle Leaf is cheerfully going through a storage room in the old clock tower (that her long-suffering employer let her raid) when a locked door unexpectedly opens, letting through a bright light and a blonde in a silk nightgown. The visitor's name is Monday Rhodes, and she claims to come from another world.

The two teenaged girls discover a mutual attraction and start building a part-time relationship with Monday commuting between Foyle's world and her own. But one day, Monday fails to arrive, causing Foyle to worry. Worry enough to open the mysterious door and go looking for her...