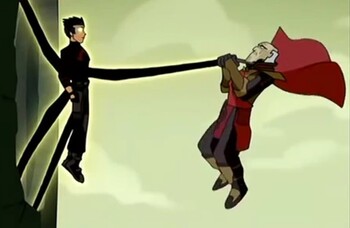 When someone has powers that relate to Casting a Shadow, a very common way their attacks may manifest is as black tendrils or tentacles of darkness that grab or swipe an opponent. Sometimes they operate like normal tentacles and simply restrain or crush the target, other times they may actually blast the target with energy as a way to harm them. Almost always Combat Tentacles.