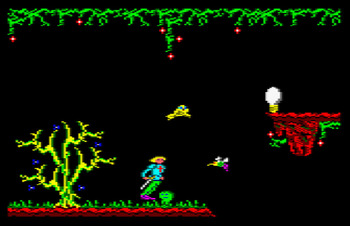 So many enemies and no easy way to face them... (Amstrad CPC screenshot)
Advertisement:

Camelot Warriors is a Spanish 1986 8-bit Platform Game produced by Dinamic Software and released for ZX Spectrum, Amstrad CPC, Commodore 64 and MSX, where an unnamed hero has to find different objects from other time that have been scattered around the land of Camelot and return them to their custodies before they can do any harm. These objects are known as: The fire that doesn't burn, The Mirror of Wisdom, The Elixir of Life and The Voice from Another World. The hero will have to travel through the forest, the lake, the caves, and the castle of Camelot to bring these objects to their custodies so that they can destroy them.