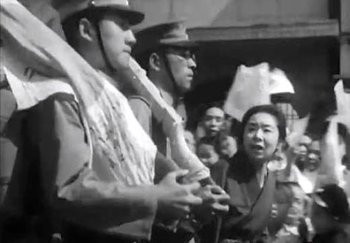 Is this Patriotic Fervor or what?
Advertisement:

It centers around three generations of the Takagi family, who are shopkeepers. It starts out in 1866, during the Boshin War

, a civil war between the shogunate and the forces of the emperor. A little lecture about the importance of military duty and the evil intentions of Great Britain and the United States sets the theme, before the film skips to 1895 and the First Sino-Japanese War. Japan wins, as usual, but the Takagi family and everyone else are outraged when Russia, Great Britain, and the United States forces Japan to cede the Liaodong Peninsula. Meanwhile, Tomohiko Takagi, the second generation Takagi, is embarrassed when poor health keeps him out of the war.

Poor health keeps Tomohiko out of the Russo-Japanese War as well, and as it turns out, he never does get to fight, although he becomes just as ultra-patriotic as every other good Japanese. His military ambitions eventually settle on his son Shintaro, a gentle, meek child whom his parents write off as a "coward". But Shintaro eventually surprises his parents, joins the army, graduates from training and becomes a fine young soldier ready to go off to war—something his mother Waka has decidedly mixed feelings about.

Army is one of the most subversive films of all time. Kinoshita, an anti-war liberal, was assigned by the Imperial Japanese Army to make a movie glorifying the army and rousing the people of Japan to support the war. Instead, Kinoshita managed to smuggle a subtle but powerful anti-war message right under the noses of military censors. After the war, Kinoshita would make more overtly anti-war films like Morning for the Osone Family and Twenty-Four Eyes.