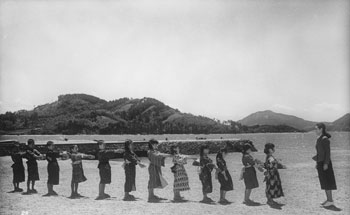 Twenty-Four Eyes (二十四の瞳 Nijū-shi no Hitomi) is a 1954 Japanese film directed by Keisuke Kinoshita and starring Hideko Takamine. It spans eighteen years, 1928-1946, in the lives of a schoolteacher and her students in a small fishing village. Hisako Ōishi (Takamine) makes a splash when she arrives for her first day of work in 1928, riding a bicycle and dressing in a Western-style suit instead of wearing a kimono. The villagers get a bad impression of her, but as she later explains to her mother, she lives too far away from the school to walk, and you can't wear a kimono while riding a bike. She immediately wins the hearts of her class, which consists of twelve students (hence 24 eyes) starting their first year of school.

A fairly innocent prank played by the students on Ms. Ōishi winds up causing her to tear her Achilles tendon, which forces her transfer to the secondary school nearer her home, because she can't ride her bike. However, this allows her kids, who are so sorry about the prank that they hike all the way to her village, to age into her class again. Unfortunately, the pressures of the world, namely The Great Depression, the Second Sino-Japanese War, and World War II, bring tragedy and heartbreak to Ms. Ōishi and the students that she loves.