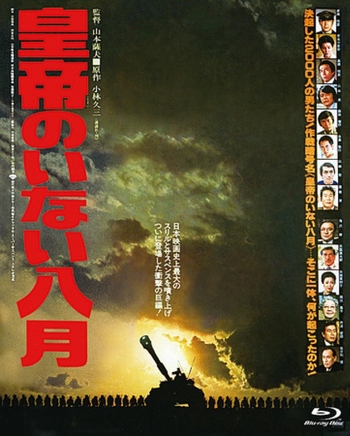 August Without Emperor (皇帝のいない八月, literally "Kôtei no inai hachigatsu") is a 1978 Japanese political thriller film directed by Satsuo Yamamoto, based off a novel by Kyûzô Kobayashi.
Advertisement:

The film, set in 198X, is about a potential coup by a group of Right-Wing Militia Fanatics who are plotting to overthrow the current prime minister (Osamu Takizawa) and replace him with their financier, Kozo Ohata (Shin Saburi), reinstate the Emperor as sovereign, and return Japan to its prewar constitution in order to return Japan to its militant past. However the coup is exposed thanks to the efforts of Toshikura (Etsushi Takahashi) of the Public Security Intelligence Agency. Under his intelligence, and with secret CIA assistance, the JSDF cleans house and arrests the conspirators, execpt for one cell under strategist Akimasa Fujisaki (Tsunehiko Watase), who hijack the Sakura sleeper train to Tokyo with a couple of bombs onboard. Travelling as a passenger is his estranged wife, Kyoko (Sayuri Yoshinaga), torn between her loyalties to her husband and her father, Tameichiro Emi, head of the JSDF's MP forces.