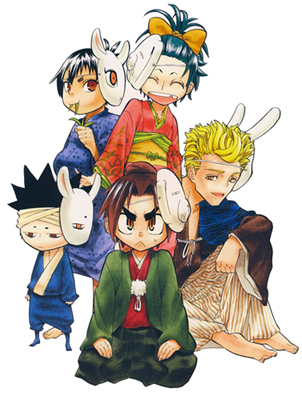 Udagawa Gosuke is a low-ranking samurai in Japan's Edo period. Upon his marriage to Shino, Gosuke is inspired to create his own dojo that will accept anybody who wants to learn the way of the sword.

In so doing, he gathers disciples but also attracts the attention of the Kobukan Dojo, a dojo that enforces the strict codes of bushido and punishes those samurai who disobey or break them.

Samurai Usagi is a short-lived shonen manga by Teppei Fukushima, which ran in Weekly Shonen Jump from March 2007 to July 2008. It chronicles Gosuke's adventures as he tries to build the Usagi Dojo into a dojo that rivals the Kobukan itself, while also trying to get the hang of married life with Shino.

Also, unlike most Shonen manga, the hero and heroine are actually married.

Not to be confused with Usagi Yojimbo.