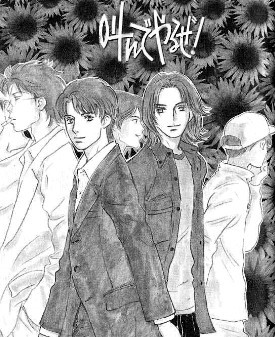 I have a work motto. It is: "When you need to shout, shout!"

One day a 17 year old boy shows up on voice actor Hisae Shino's doorstep, claiming to be his son. It turns out the reason his high-school girlfriend had left him when they were 17 was because she got pregnant and thought having a child would ruin Shino's career plans but didn't want to give up the baby, Nakaya. Sick of living with his strict grandmother after his mother's recent death, Nakaya searched for his father and showed up at Shino's house to insist they live together and become like family.

Shino gives in but in order to provide for them he begins taking on any work he can get, no matter what it is. Amusingly these projects end up being mainly Boys' Love drama cds, as he has "the perfect uke voice." Nakaya is shocked when he finds out and disapproves at first, but this is only the tip of the iceberg as both eventually are confronted with homosexual relationships in their own lives and then in turn each has to grapple with the possibility that his son/father is homosexual.

Ultimately a Slice of Life family drama in which the characters deal with trying to sort out a father-son relationship that comes 17 years too late, and their own very conflicted love lives. Often funny, and by the end is pretty much Bittersweetly Heartwarming: The Manga.