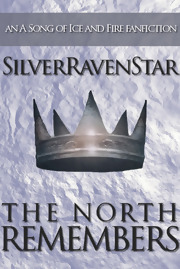 "I am the North, and the North remembers."
— Sansa
Advertisement:

The North Remembers is an A Song of Ice and Fire Continuation Fic written by Silver Raven Star, intended to be the direct sequel to the events which happened after A Feast for Crows and A Dance with Dragons. It is now complete.

The future of Westeros, and that of the Great Houses and their Kingdoms, hangs in the balance as the long winter starts its descent into the continent with the invasion of the Others. The game of thrones is now currently battled between House Lannister, which has suffered heavy losses from the War of the Five Kings and the ineptitude of Cersei's mad rule, and the rejuvenated Targaryen cause led by Aegon VI. In the North, Stannis Baratheon leads his men in the harsh winter against the turncoat Roose Bolton and his treacherous Frey allies, while relations between the Wall and the Wildlings have quickly fallen into ruin. Meanwhile, Tyrion Lannister has arrived in Meereen, unknowing of Daenerys's current predicament, and in the city of Braavos Arya struggles to abandon her identity as a Stark.

is for the most part centered on the viewpoints of the Stark family and that of their allies. At just over 600k words, it is a bit shorter than the first two books in the series.