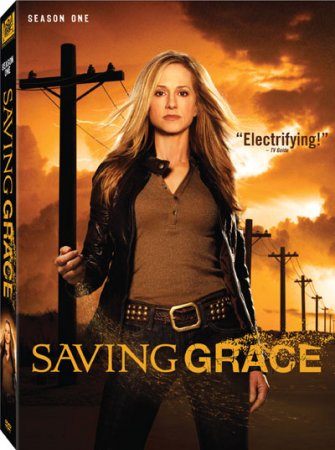 "So pretty and so bold
Got a heart full of gold
On a lonely road
She said, "I don't even think that God can save me."
Am I gaining ground?
Am I losing face?
Have I lost and found my saving grace?
Thankful for the gift my angels gave me."
— Theme song by Everlast
Advertisement:

Cop Show with a Godly twist.

Grace Hanadarko (Holly Hunter) is an Oklahoma City detective. She's pretty good at her job, but she smokes, she drinks, she's a Drunk Driver, she boinks anyone she can get her hands on, she flashes her neighbor every time she takes a shower (deliberately and with full enjoyment by both parties)...

Then one night when drunk driving, she hits a guy and kills him. As one is wont to do in that situation, she begs God for help. An angel named Earl (Leon Rippy) answers, telling her she's going to hell and he's her "last chance angel." And he's going to be popping in and out of her life from now on...

As it turns out, Grace didn't even kill the guy she hit with her car—in fact, the guy's alive and well and on death row. Leon Cooley (Bokeem Woodbine) is another one of Earl's clients, and to him it was some kind of dream. And yet, there's forensic evidence proving that Earl exists, Leon was there on some level, and something happened.

Grace continues to get up to bad behavior and solving crimes... with Earl along for the ride.

Not to be confused with Saving Hope, the Canadian supernatural medical drama, or Saving Grace, the 2000 British comedy.