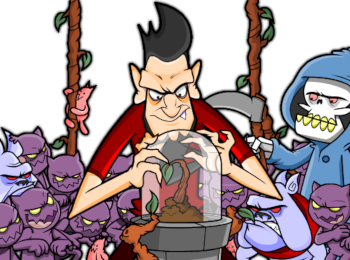 Reincarnation is a series of online point-and-click adventure games made by B-group Productions. The story is about Hell, which is slightly different than you would expect in that there is a built-in way to escape: portals to the mortal realm are scattered throughout Hell, and any soul who finds one is reincarnated and given a chance to atone for their sins, thus moving on to Heaven. When enough souls have escaped, God can shut down Hell for good. To prevent this from happening, Lucifer ("Luke" for short) sends his demons to the human realm to catch the "Reincarnies" before they can turn good and send them back to Hell.

There are three full-length games in the series:

The games can be found on the creators' blog,

as well as on gaming sites such as Newgrounds and Kongregate. A commercial game titled The Root Of All Evil is in the works.