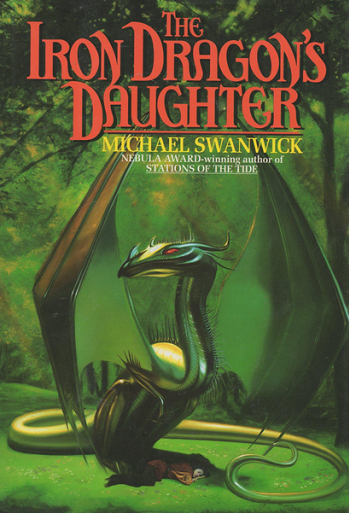 The Iron Dragon's Daughter is a novel by Michael Swanwick, published in 1994.
Advertisement:

The main character is Jane, a human girl in a world of faeries and magical beings, who's a child slave in a factory that produces parts for Iron Dragons — that world's equivalent to fighter jets. One day, during a failed escape attempt, she finds a discarded grimoire, which turns out to be an operational manual to an Iron Dragon. This leads her to discover an old, broken down dragon who's Not Quite Dead. Melanchthon, Dragon #7332, offers to help her escape if she helps him restore his basic functions.

The story follows Jane as she tries to carve out some sort of life for herself in a world where humans are near-powerless rarities, first with the help of Melanchton, then without him when he abandons her, then with him again when he decides it's time to carry out his master plan: the destruction of Spiral Castle, and with it, the entire fantasy world.

The Iron Dragon's Daughter is, at its heart, a subversion of the Plucky Heroine archetype, as Jane is nothing special (as a human, she has no innate magic, nor any of the physical attribute of other species) and stays that way, even as she's drawn into Melanchthon's web of madness.