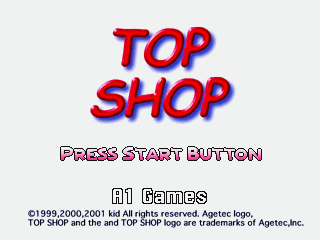 Top Shop is a video game released in 1998 for Japan and 2001 in North America for the Sega Saturn (In Japan only) and the Playstation. It's similar to Monopoly, but more focused on property management. The game takes place in a mall, where different tenants battle each other for control of the properties. After landing on, purchasing, and building a store on an unowned space, the tenant's opponents can land on that space and be forced to purchase something from the store. However, if the store runs out of stock, they can steal that property from the current owner... if they can afford it. Store owners themselves can expand their stores (increasing the max items each section can hold AND allowing them to stock increasingly expensive items) if they land in spaces next to an existing store in the block, to a maximum of a four-space store that fills the block entirely. Additionally, everyone can accumulate 'points' that can be exchanged at the bank (effectively the "Go" space) to either improve their situation, screw over other players, do both at once, or do other miscellaneous things.

There are two gameplay modes; Free Play and Story mode. The story mode follows a cat named Meower, whose main goal is to become rich. In Free Play, up to six players (all of which can be substituted with AI bots if desired) can play, in addition to allowing the players to tweak the victory conditions. This said, whichever mode the player selects, their goal is to either amass a given amount of combined cash-on-hand and assets, or to bankrupt a given number of players (not necessarily ALL of them, in which case it would be a good idea to be in first place beforehand).

Nothing to do with the British fashion chain of the same name.