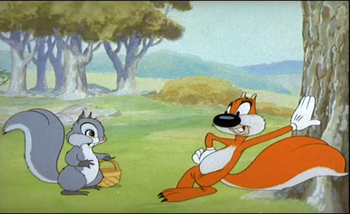 Screwball Squirrel is a 1944 animated short film (6 1/2 minutes) directed by Tex Avery, one of the Tex Avery MGM Cartoons.

It introduces the character of Screwy Squirrel, who appears in only five cartoons. It actually starts with a very cute Disney-style forest scene showing a happy, singing little squirrel named Sammy. He is soon pushed aside however by Screwy Squirrel, who, apparently with nothing better to do, taunts a slow-witted bird dog named Meathead Dog into chasing him. The rest of the cartoon is an utterly insane chase, even for Tex Avery, in which Screwy continually gets the best of the poor dog.

Despite being an iconic character, Screwy appeared in only five cartoons, possibly because he was just too mean.