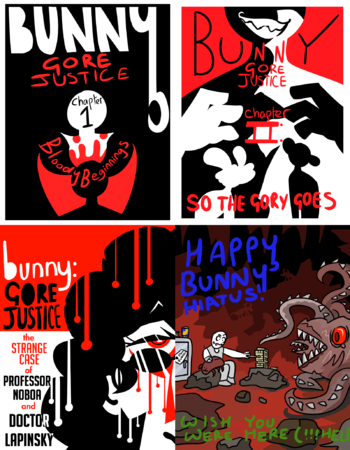 is a webcomic set in the Colkinom universe. It's described as a dystopian tragedy, depicting a grotesque experiment and the protagonists' attempts to put a stop to it.
Advertisement:

It follows Bunny, a strange masked vigilante, in her mission to interfere with Professor Komodo's experiment. The experiment involves brainwashing and mutilating thousands of people into being identical, trapping them on an island, then ruling them with an unpredictable iron fist. Mutinies are seen rising and falling, and Bunny befriends the deserter Chopper. Though Bunny isn't exactly trustworthy, Komodo isn't much better, and the choice to pick a side is a risky choice to make.

As expected from the title, the comic contains large amounts of bloody cartoon violence.