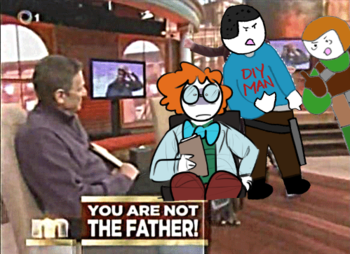 The monsters in the Repulsion Zone are humans mutated by the zone's hostile environment.

Bunny is a robot created by Dr. Helga LaPinsky. She ate her creator and escaped.

A la Fight Club, Bunny is a figment of Chopper's imagination, or vice versa.

Gehren Island is Hell and Komodo is Satan, All the characters are dead. This is their punishment.

Komodo is a failed test subject from Bionic Badger

Komodo is the result of a failed bionifying experiment from the Colkinom film Bionic Badger, before Excoffon Labs moved onto badgers.

The original. The theory is that Glan Sterling/Chaos Master from Sevens Crew Origins

A better variation on the Glan Basingstoke Theory. This theory states, instead, that Rupert is Glan Sterling, but grown up in an alternate universe, or 'colkiverse'.

In the same vein as Glan Basingstoke, this assumes that Rupert is the brother of Jonah and Jordan Gordonson of Slug-Man and other Colkinom titles.