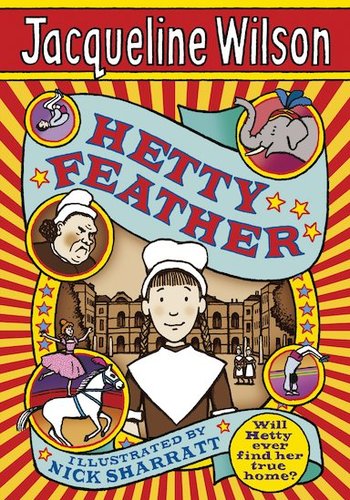 Hetty Feather is a book series created by British author Jacqueline Wilson, the title book being released in 2009.

Having reached critical success, Hetty Feather went on to spawn a TV series by the same name, first broadcast in 2015 and lasted for 6 series before ending in 2020.

Set in mostly in Victorian London, the series follows foundling Hetty navigate life on a gene-hunt for her biological parents, encountering some interesting experiences and people along the way and a series-long Love Triangle.

Tropes specific to each book:

open/close all folders
Hetty Feather
The first book in the series. Hetty documents in first-person the first 10 years of her life, from living in foster care to moving to the Foundling Hospital where she is trained for service.

Sapphire Battersea
Hetty leaves the Foundling hospital at 14 to become a Scullery Maid for an author, Mr Buchanan, and builds a relationship with her newfound mother.

Emerald Star
Hetty heads North to find her father, and returns back to her childhood home and is faced with a difficult choice-her home with Jem or the Circus?

Advertisement:
Diamond
We are introduced to titular character Diamond, a new friend and fellow Circus-Act of Hetty's, with whom she adjusts to Circus life.

Little Stars
Hetty, now a young adult, becomes a Music Hall Artiste with Diamond, navigating the ups and downs of show business and reconciling her feelings for Bertie and Jem.

General tropes that apply to the whole series: