Literature / The Mill on the Floss 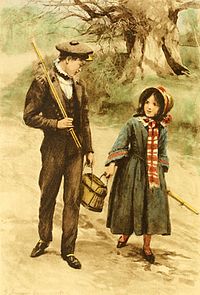 The Mill on the Floss is a novel by George Eliot, which charts the Coming of Age of Maggie and Tom Tulliver, two siblings living in a fictional hamlet in Lincolnshire. The siblings' complex and at times strained relationship is further complicated when the family fortunes waver and Maggie - ever disapproved of for her "unladylike" temperament and pursuit of knowledge - finds herself yearning for an affection which her adored but stern brother withholds, only to find a kindred spirit in Phillip Wakem, son of the man both Tom and their father Edward hold responsible for the latter's misfortunes.